Humility, wanting to be cheated, Goswāmīs rob, who attains Vaikuṇṭha?


Dāmodar:
Advaitaji, what kind of relationship should we have towards other religions? The "harer nāma" verse means that others, who do not chant harinām, they are at a lower level. But I do not want to think that I am better than others because I chant harinām...

Dāmodara-
But most people, they accept different kinds of false Gurus. What does it mean? That they have lack of saṁskāras? They want to be deluded?

Advaitadās-
It is all destiny - adhikāra bheda. Nobody wants to be cheated.

Another bhakta -
radhe radhe!
Recently I have read one of the boards about Gauḍīya Vaiṣṇavism where one mātājī has written a very offensive thing, I quote, "The 6 Gosvāmīs used to rob people in order to earn money for book writing".  I've asked her to show me the source of this statement in Caitanya Caritāmṛta or Caitanya Bhāgavat.  But she said that this information she has heard from some ISKCON devotee, and she can't give any source.  So what can you say about this statement? What are the roots of this statement? I realize that this is total bullshit, but I have a very anxious mind and things like that disturb me very much.

Advaita Das
There is no evidence for such a scandalous slander. In 35 years śāstra-study this is the first time I hear  such an outrage. The Goswāmīs did not need money for book writing - there were not even books then. The printing press was brought by the British in the 19th century only.

Bhakta: is it true that everyone who leaves the body in Vraja will attain the spiritual world?

Advaitadas: There are such statements in the Purāṇas, yes, but these same Purāṇas also say that Vaikuṇṭha can be a temporary destination for those who performed pious acts. This refers to Śvetadvīpa, an outpost of Vaikuṇṭha in the top of the material universes. Furthermore, Śrīla Rūpa Goswāmīpāda has stated in Bhakti Rasāmṛta Sindhu (1.2.56) that of the four types of Vaikuṇṭha-liberation one is called sukhaiśvaryottarā, which means the predominant desire (uttarā) for the happiness and powers which are natural to the spiritual world. This explains how it is that simply by leaving the body somewhere, even if one is not a pure devotee, which could be the case with many Vraja-residents, one can attain Vaikuṇṭha. 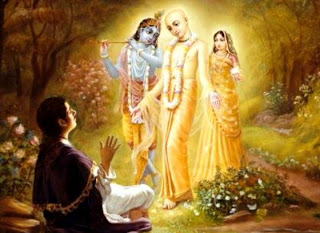 “First I saw You as a sannyāsī, but now I see You as a Śyāma cowherd boy. Facing You I see a golden doll, which covers Your whole body with a golden luster. In that I see manifest Kṛṣṇa playing His flute. “

“You have accepted Rādhā’s feelings and complexion, and have descended to relish Your own rasa.”

“My body is not golden. It is touched by Rādhā’s body. She will not touch anyone but that prince of cowherds, my heart and mind think in Her way. Thus I relish the flavors of Her sweetness.”

Gaur vs Kṛṣṇa-līlā practise is like biting an apple - the peel is Gaur-sādhana (bite by just offering vandana), and the flesh is Rādhā- Kṛṣṇa-līlā.
Posted by advaitadas at 2:19 PM 5 comments: 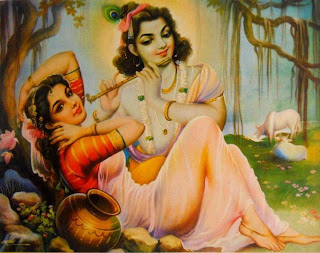 “Because the upapati (adulterer)’s actions are depicted in plays and poems, one may develop a taste for them as if the upapati had worthy conduct.

Even persons of good conduct, absorbed in such depictions, may fall into identification with such a person and becomes tinged with irreligion, in the manner of yad adharma-kṛtaḥ sthānaṁ sūcakasyāpi tad bhavet: the person who points out the sinner attains the same place as the sinner. (SB 1.17.22) “

On my website madangopal.com, in the file ‘Wisdoms’, I had quoted a mundane philosopher saying that if one gets obsessed with thoughts of an enemy one assumes that enemy’s very qualities. That quote has been replaced with this one now, as mundane philosophers are non-Vedic and subject to the four defects. In this way all material on my site will follow śāstra.

Posted by advaitadas at 11:46 AM No comments: