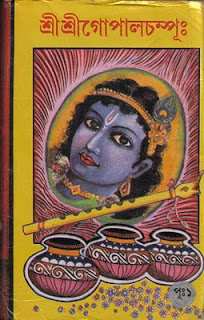 "Varuṇa has a certain mystic power [vidyā] with which he manages to block water [jala-stambha] out of his abode, which is a hole underground under the Yamunā."

Hence pictures that depict Kṛṣṇa visiting Varuṇa under water are not correct.

"Varuṇa accompanied Kṛṣṇa and Nanda Mahārāja till the gate of the cave in which he dwelled and there made a cleavage in the water so that they could easily return to the surface of the Yamunā."

"After killing them, Kṛṣṇa will take the unlimited booty of mlecchas like Kālayavan to Dwārkā but will not consider it pure since it was used by the mlecchas."

This proves that money from mlecchas is untouchable. It is not that Hindus can enjoy the money and women of mlecchas (western devotees) and not accept their devotional service, as often happens in Indian Sadhu communities. Either one is totally untouchable or totally acceptable.


“Though this subject is concealed, Varāha in his Purana reveals this. You should not consider this false at all. In the Varaha Purana it is said that Kṛṣṇa won the gopīs, along with wealth, in a dice game from the gopas. Brought by the cowherds they were offered to Kṛṣṇa.”

I am curious what the rest of the Varāha Purāṇa-text would say about this.
Posted by advaitadas at 4:24 PM 2 comments:

Girrirāj and the following darkness 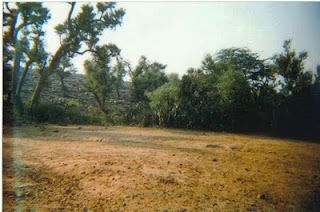 11 December 2010 - Girirāja parikramā on foot, the first one in 6 years time. I thought I was too old to do it but I managed to complete it. I was crippled only two years ago and even 8 months ago I was still undergoing therapy, and yet now I walk 23 km. [14 miles] in one stretch! It is clearly Girrāj's mercy. Despite all property development around Girrāj the parikramā on foot is still a magical experience. The inner path is still vintage, pristine Girirāj, with so much śānti. It was non-different from the many beautiful parikramās I performed in 1985 and 1987. I must confess I took some artificial aid to complete the parikramā - 1 loperamide in the beginning to secure the stomach (to prevent having to do big toilet on the way), and halfway, at Pucchari Ka Lota, a cup of tea to give me strength for the second half.

This was also the end of my 2010 Radhakund-trip, which was my best trip to India for at least 7 years, in very sharp contrast with the previous trip in 2008, which was one of the worst ones.

Now back in Holland - it is said in śāstra that after seeing light, the following darkness is all the more deep. How true it is. Though the weather was fine when I returned, the emptiness of missing Braja is almost too much to bear this time.

Among the ten offenses, the very strong effects of interpreting the name, thinking its glories are exaggeration and equating it to pious acts—are obstacles to being a Vaiṣṇava. Among the other offenses two are very strong—offending the devotees and committing sin on the strength of chanting. Those two are particularly described in a frightening way.

How can the name tolerate criticism of those who spread the name? (Padma Purāṇa)

For a person who commits sin on the strength of chanting there is no purification by the servants of Yama. (Padma Purāṇa)

There is no other means of destroying the effects of these two offenses than to continually chant the name while suffering appropriately for the offense. The effects of the other offenses will be destroyed simply by continual chanting (without the suffering).

Some people make the following proposition:

"Those offenders of the name who are without karma and jñāna, and who practice bhakti with hearing and chanting but have not taken initiation because they have not surrendered to the feet of a guru are still called Vaiṣṇavas. The word vaiṣṇava is defined as 'the person who takes Viṣṇu as his object of worship' according to Pāniṇī's sūtras 4.2.24 and 4.3.95. Thus Vaiṣṇavas are those who have made Viṣṇu the object of worship by accepting initiation but also those who make Viṣṇu the object of worship simply by worship, since there is no other word to describe the two types of people. So the latter type of persons also should not fall to hell."

This however is not correct because one cannot attain the Lord easily without Guru.

"Having attained the human body, rarely attained, but attained easily sometimes by good fortune, which is like a well-constructed boat, with the Guru as the captain, pushed by the favorable wind of serving me, a person who does not cross the ocean of material existence is a killer of himself." (SB 11.20.17)


Therefore it should be explained that there is no other way of attaining the Lord than by becoming a devotee who has surrendered to the feet of a Guru, who will be attained in another birth by the power of worship. "But it is seen that Ajāmila, without surrendering to guru easily attained the Lord." This can be explained as follows. Those who, like cows or asses, make their senses pursue sense objects cannot know the Lord, bhakti or Guru even in their dreams. But as in the case of Ajāmila, they can be delivered even without Guru by chanting the name in namābhāsa without offense. Though it has been definitely ascertained that the Lord should be worshiped, that worship is the means of attaining him, that the Guru is the person who teaches about worship, and that those who are devotees attain the Lord, it is also said:

As well, we have the example of Ajāmila. But one who thinks, "What is the benefit of taking the trouble to accept Guru'- I will attain the Lord just by chanting the name," will not attain the Lord, because of the offense of offending Guru (third offense). However, in this life or another life, if he surrenders to the feet of Guru after destroying his offense, he will then attain the Lord. Some people say that persons who worship devatās should be treated like the karmīs with sin and offense. Others say that Bhakti-devi places them in an even lower category because they do not have general surrender. Thus it is said:


Those who are devoted to other gods and with faith worship them-they also worship me, but by the wrong method, O son of Kunti. (Bhagavad Gītā 9.23)

But for those who are simply offenders there is no deliverance at all. It is said:


I cast those hateful, cruel, and lowest of humans, constantly doing evil, into repeated birth and death in the wombs of demons. (Bhagavad Gītā 16.19)


Just as by vaidhi-bhakti one can attain one's spiritual goals, many persons have attained suitable forms, after absorbing their minds in the Lord out of lust, hatred, fear and family relationships filled with affection, and after giving up absorption in enmity of the Lord (in the case of hatred and fear). SB 7.1.30
This idea is represented in verses such as the following:


Even if in the beginning one chants the holy name with offenses, one will become free from such offenses by chanting again and again. (Padma Purāṇa)

Others say that "absorption" means repeated meditation in order to be effective. Others say that there is no absolute rule when Kṛṣṇa appears in the world. Thus some persons without being absorbed in the Lord, but simply by being killed by the Lord—such as Narākasura, Bāṇāsura and the troops of the Kauravas and others simply by the influence of seeing the Lord attained the Lord. This was previously mentioned in the Bhāgavatam.

6.2.13 - From the moment he named his son Nārāyan, Ajāmila performed all atonements. This was also done without any offence to the name, either previously or currently.

6.2.14 — Chanting the name of the Lord, while indicating someone else, while joking, to fill up space while chanting verses, or chanting with neglect destroys unlimited sins and desires.” That desires are uprooted by nāmābhāsa is the exclusive opinion of Viśvanātha here. "Saṅketya means referring to someone like a son. parihāsyam iti prītigarbham eva na tu nindā-garbham "Parihāsya means calling jokingly but with affection, not with criticism. yathā bho vikhyāta kīrte kṛṣṇa nāma dṛṣṭvā tava kīrtir yato māṁ noddhartum aśakyas tvam iti. "Oh famous one! Your fame is like that of Kṛṣṇa, since you can save me." stobhaṁ kathā gītālāpādi pūraṇārthaṁ kṛtam. Stobha means to chant the name in order to provide proper meter during a discourse or a song. helanam atra helayā girir uddhṛta itivad yatna-rāhityam evocyate, yathā āhāra-vihāra-nidrādāv apy avahelayā eva yāvanti kṛṣṇa-nāmāny ayaṁ gṛhṇāti, na tāvanty anyaḥ prayatnenāpi gṛhītaṁ śaknuvantīti, na tu nindāvajñādikam, tathā sati nindāṁ bhagavataḥ śṛṇvan ity āder bhagavato nindake kiṁ vā viṣṇuneti tad-avamantari veṇādāv api doṣāvahatvaṁ "Hela means chanting with disregard, without attention, or as in 'Kṛṣṇa lifted Govardhana, casually [helayā]. Others cannot utter the name with effort as much as these persons who utter the name of Kṛṣṇa without effort, while eating, playing or sleeping. This chanting is also without criticism or disrespect.The Bhāgavat says [10.74.40] 'Anyone who does not leave the place where he hears criticism of the Lord or His votary will fall down."Thus critcism or disrespect like that of Vena, by saying 'What is the use of Viṣṇu?' is filled with fault [and thus does not have effect]."This shows that the attitude of 'as long as they say Kṛṣṇa,  even in a hostile manner - any publicity is good publicity' does not mean that the hostile chanter is benefited in any way, perhaps only that some name and publicity is given to Kṛṣṇa in non-Vedic countries. tasmād aśeṣāgha-haraṁ vāsanā-paryanta-sarva-pāpa-nāśakam - "aśeṣāghara-hara  means not only all sins but also desires are destroyed by chanting."

The fact that there is a clear distinction made between nāmābhāsa and deliberate chanting (‘with faith’) in this verse with the words 'kim utā śraddhayā ghṛṇan' proves once more that nāmābhāsa can never be a sādhana. To use the terms 'clearing stage' for nāmābhāsa clearly indicates a sādhana, an ongoing process, whereas it is in all cases described to be accidental chanting. An accident is not a stage. No ācārya speaks of nāmābhāsa as a stage of sādhana whatsoever.

6.16.57 Vaṁśīdhara speaks of vismṛtam, forgetting, as anādyajñāna, beginningless ignorance. Some who try to defend fall-vāda, do not mention this but jump to other conclusions, even using this ṭīkā of Vaṁśīdhara along with the usual material logic.
Posted by advaitadas at 6:19 AM 4 comments: