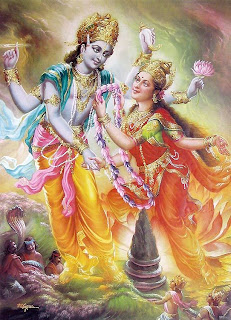 In addition to two blogs I made earlier on the eternality of the Lord’s ornaments and weapons, on December 12, 2012 and July 24, 2010, here is a summary of other comments made on the issue earlier, plus added comments by the ācāryas.


Satya Nārāyan Panditjī said in the blog of 24/7/10 “Śrīmad Bhāgavat 10.3.9 says that Kṛṣṇa was born with them (His ornaments), and then they became unmanifest.” The proof of that is in Śrīmad Bhāgavat  10.3.46, vabhūva prākṛta śiśuḥ – After Vasudeva and Devakī offered their prayers to the Lord, His ornaments vanished again. In other words, Kṛṣṇa may appear without Kaustubha gem before Kāliya and then get it back, or without Lakṣmī devī before the milk ocean and then ‘get her’. Viśvanātha Cakravartīpāda explains in his commentary to 10.3.46 that Kṛṣṇa’s body may be called prākṛta here, but it is always transcendental, quoting S.B. 10.9.13-14 –


"The Lord, who is called Adhokṣaja, He Who is not perceivable through the material senses, has no inside, no outside, no before and no after. He is pervading the world from west to east, inside and outside, and His form is the world itself, but now He allowed Himself to be bound to a grinding-mortar by His gopī-mother, just like an ordinary mortal human child."


There are many instances in the śāstra where Lord Hari receives as if for the first time his personal effects. In Viśvanātha Cakravartī's commentary on Bhāgavat 10.16.65-67, the Kaustubha is presented to Kṛṣṇa by Kāliya and his wives as part of their worship of him. Then there is the pastime of the Lord getting the conch from the sea, and many other similar episodes. The case could be the same in the churning of the milk ocean. Viśvanātha writes:

"The Kaustubha gem which adorned Kṛṣṇa's neck from His birth was lost in the coils of Kāliya in order to create excitement in His human pastimes of fighting and struggling with Kāliya. Without anyone's notice, Kṛṣṇa made His Kaustubha gem enter Kāliya's treasury. Then, at the time of worshiping Kṛṣṇa with different jewels and ornaments, the Nāga-patnīs, unaware of Kṛṣṇa's magical trick, offered the Kaustubha gem to Him, thinking it was just one of their own jewels (maṇibhiḥ)."


“The Lord had made His Kaustubha gem enter the serpent's lake, and then He arranged for it to be presented to Himself by the hands of Kāliya's wives."


In that episode Lakṣmī is consecrated with a ceremonial bathing, which is re-enacted to a degree in the Vraja līlā as depicted in Mādhava Mahotsava, where Śrī Rādhikā is showered queen of Vraja. The emergence of Śrī-devī and her espousal with the Lotus-eyed Lord restored the prosperity of the three worlds to the gods, who had lost the same through Durvāsā's curse. In Rāma līlā also the lord acquires, as if newly, his eternal weapons.

Viśvanātha Cakravartīpāda comments on the Samudra Manthan story (churning of the Milk Ocean in the 8th Canto of the Bhāgavata) that Lakṣmī has two rūpas: sampad-rūpa, a personification of enjoyment and luxury (bhogaiśvarya), and hari-preyasī-rūpa, which means that she is sati (chaste) or pativrata (dedicated to the husband). These two forms become one as she chooses Nārāyaṇa, her eternal husband, for her husband, her shelter. The ultimate abode of both Lakṣmīs is Nārāyaṇa's chest. As far as her origin, Viśvanātha only says that she made Samudra, the ocean, her father.


Bṛhad Bhāgavatāmṛta 2.4.171, commentary: According to the Purāṇas and other scriptures, even neophytes, what to speak of mature, experienced devotees, are more favored by the Lord than is the material expansion of Lakṣmī. Why? Because Durvāsā cursed her, or on some other pretext Lakṣmī is always disappearing from one place and appearing in another. Thus at any moment she can abandon persons who have taken shelter of her. Nonetheless, because she is an incarnation of Mahā-lakṣmī, she has many of the exalted qualities of the original goddess of fortune. Thus we hear that during the churning of the Milk Ocean, when the material Lakṣmī appeared from it, Lord Viṣṇu accepted her as His wife and she took up residence on His chest. In contrast with this Lakṣmī, the original Mahā-Lakṣmī is Lord Nārāyaṇa’s dearmost servant. Always fully dedicated to His service, she remains on His chest eternally and is never fickle. The Lord’s devotees always worship her with the greatest reverence; they never neglect her as they do her material expansion."

Eye of the beholder, liberated gṛhasthas, quotes in śāstra, attention 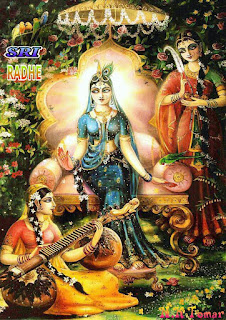 A number of points I picked up recently-


The body is just a shell. The person may be beautiful external but demoniac inside, or ugly outside and beautiful inside. How beautiful is a coconut? It looks awful on the outside, but the inside is delicious, juicy and wholesome. The sage Vyāsadeva wrote all the śāstras, but the Mahābhārat says he was too ugly to look at for Kāśīrāj’s daughters when he impregnated them. One of them was punished for it with a blind child even. rūpa mātrena na hāryo hariḥ - Hari is not just captivated by external beauty.


I received this message recently -
Please accept my dandavats. Now Vaiṣṇavas are facing challenges that quotes from Hari-bhakti-vilāsa cannot be found in the related śāstras (at least, in the texts available on the internet). How do traditional Gauḍīyas explain this problem (if it really exists)?  Unfortunately, nobody of us (either traditional or neo-Gauḍīyas) could give a satisfactory answer. Could you please help me with this question? Thank you in advance.”


"Knowledge which is not firmly rooted is lost, hearing is lost when one is inattentive, advice is lost by doubting it, and japa is lost through a restless mind."


In his Krama-sandarbha, Jīva Gosvāmī says that just as iron is converted into gold through contact with a touchstone, similarly, the Deity’s presence transforms a physical structure into a temple, or in other words, a transcendental residence. He adds, however, that most people do not see the temple as transcendental because they lack the eye of devotion.

This proves Satya-nārāyan Panditjī’s point about Lord being present in the deity only due to the bhakti-eye of the beholder.
Posted by advaitadas at 7:16 AM 1 comment: